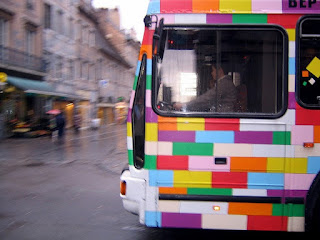 What Really Happens When a City Makes Its Transit System Free? - Jobs & Economy - The Atlantic Cities: "Mayet, a member of France’s socialist party, did what few mayors confronted with a struggling mass transit system would do: he made the whole thing free.

Ever since, the otherwise ordinary French town has become a canary in the coal mine of transportation policy, closely watched by the dozens of other municipalities in various stages of free transit experiments. According to a report [PDF, French] released this year, per person ridership in Châteauroux has jumped from 21 trips a year to 61. Total ridership is up 208 percent in 11 years."

In a bid to encourage people to choose public transportation, the southwest Chinese city of Chengdu, capital of Sichuan Province, waived bus fares and offered discounts on metro fares from today.
According to a spokesman with the Chengdu Municipal Public Transport Group Corp, the free bus fare policy will remain in effect until June 30 next year.
Today, 33 bus routes went fare-free, and the number will increase to 44 by the end of the month.
The mega-city on Monday introduced a regulation ordering some vehicles off the streets on certain days depending on the license plate numbers, a system that has also been carried out in Beijing and some other Chinese cities to help ease traffic congestion.
However, the vehicle restriction and bus fare exemption policy brought new troubles this morning, drawing larger-than-ever crowds to bus and metro stations, state-run Xinhua news agency reported.
Many netizens vented on Sina Weibo, China's popular microblogging service, complaining that they could not catch a bus in the morning.
"Today, I was lost in Chengdu's chaotic public transport system," wrote netizen 'Hejin firefly'.
The company will continue to improve public transport services by adding bus shuttles and opening more bus routes, among other measures, to cope with increasing demand for public transport, the spokesman for the public transport company said.
Despite the complaints, citizens in other Chinese cities such as Nanjing, Ningbo and Shenzhen called for other cities to usher in such incentives.
Like all big cities in China, Chengdu sees heavy traffic jams, especially during weekday rush hours, with drivers complaining about slow movement of vehicles during peak traffic times in the city's downtown.
The three cities, Beijing, Shanghai and Guangzhou have restricted the purchase of new cars to ease traffic on the roads.