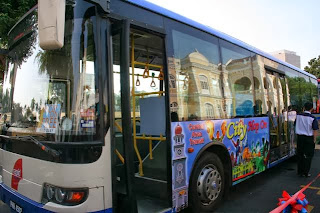 Penang Hop On Free Central Area Transit (CAT): "Visitors to Penang can now enjoy a bus ride within George Town, the UNESCO World Heritage City, for FREE."
at 12:31 AM No comments:

Free is cheaper. Hasselt was able to lower taxes after implementing #freetransit

CarFree Times Issue 7: "The Fall, 1997, issue of Carfree Times reported that Hasselt, Belgium, had made its bus system free. The mayor rejected plans for a third ring highway, converted one existing ring highway into a pedestrian and bicycle street, and made the buses free. Since then, bus ridership has increased by 800%. This initiative has been so successful in attracting new business to Hasselt that taxes have been cut and the city's debt is down. To celebrate the first anniversary of the changes, the mayor announced free bicycles. One of the reasons the measure was adopted was a shortage of funds - the city did not have enough money to expand its roads. Free buses were a cheaper alternative, and it worked. The city had been slowly losing population, but since the new measures were adopted, population has been rising 25 times faster than it had been shrinking."